Woe the Ornamental Pear Tree: Invasive, But Does It Make the “Invasive List”?

Trouble’s brewing over the fate of Ornamental Pear [Pyrus calleryana] trees. It seems that this tree (you may know its cultivar names such as Aristocrat, Bradford, Chanticleer, Cleveland Select, Redspire, Trinity, or Jaczam) is becoming invasive in northeastern Illinois. In fact, Cathy McGlynn, coordinator of the Northeast Illinois Invasive Plant Partnership, told me that attempts to regulate its sale were recently proposed because conservationists fear that “it may become the next Buckthorn.” In fact, just last week–presumably because nurserymen (with lots of ornamental pear trees to sell) freaked out–the Illinois Invasive Species Council decided to slow down on regulation, opting not to list the pear as an “exotic weed” at this time but instead to do “education and outreach and shift market focus”, according to McGlynn. (Methinks this means that the Ornamental Pears will not be for sale anymore in 3-5 years, so watch for some good $$ deals from nurserymen…). 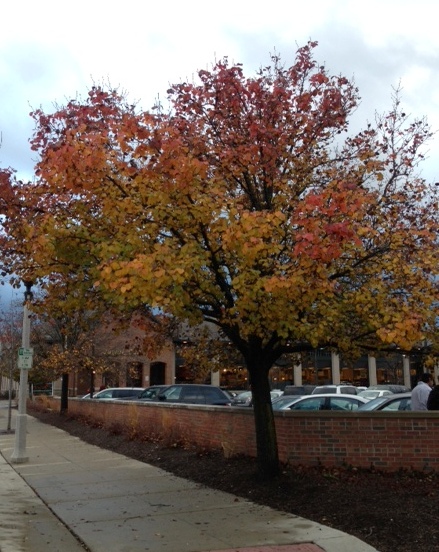 (Note: there is a small 12′ x 15′ pear tree that is of a different species: Pyrus fauriei ‘Korean Sun’. No word on the invasive aspect of this species.)

Now all this is enough to make Queen Bee quite crazy. Why? Because while we should (rightly) worry about pear trees, the elephant in the room is still, even after decades of education,  BUCKTHORN. This tree is without a doubt the most injurious invasive plant in Illinois. Sadly, it is only illegal to sell buckthorn (see the Exotic Weed Act below) but it is still quite okay to continue to grow it on your property, which means it is not on Illinois’ Noxious Weed Law (see below for list of the plants that require eradication).

Why isn’t the disgusting Buckthorn banned? Because homeowners think it is a great screening plant and refuse to spend the money to take it out and plant appropriate shrubbery that stays put. And elected officials who could change the law listen to their whining neighbors. To that I say, “Enough is Enough!”. If we can ban smoking in restaurants and public places, we can insist that Buckthorn be banned too. Start easy if one must (Queen Bee holds her nose here): create a law that only outlaws all the female Buckthorn plants (the ones with black berries that the birds eat and then spread). But move ahead with stating that Buckthorn is a noxious weed. Our legacy as gardeners must be to demand of each other that we all save our wild areas from Buckthorn. And Garlic Mustard. And, yes, Pear trees…

If you want to see where Ornamental Pear trees and other “new” invasives are being spotted in northeastern Illinois, here’s an interesting website: http://www.newinvaders.org/. And here’s a link to an Ohio research study on Pears’ invasiveness: Theresa Culley, Spread and Ecological Impacts of Callery Pear (Pyrus calleryana) and Other Ornamentals in Southwestern Ohio. (Webmaster’s note 04-2019:  Broken Link, could not find this article. See The Beginning of a New Invasive Plant by T. Culley.)

It shall be unlawful for any person, corporation, political subdivision, agency or department of the State to buy, sell, offer for sale, distribute or plant seeds, plants or plant parts of exotic weeds including:

It shall be the duty of every person to control the spread of and to eradicate all noxious weeds on lands owned or controlled by him in the State of Illinois.

Marihuana (Cannabis sativa L.)  [Editor: we’re they smoking it while they were trying to spell it??!]

Perennial members of the Sorghum genus, including Johnsongrass (Sorghum halepense), Sorghum almum, and other Johnsongrass x sorghum crosses with
rhizomes;

According to its website, the Midwest Invasive Plant Network is working with the Northeast Illinois Invasive Plant Partnership, Chicago Botanic Garden, Lake County (IL) Forest Preserve District, and The Nature Conservancy to provide information to both nurseries and consumers about ornamental plants that have become invasive plants in native areas.  Some of these ornamental escapees include –

Japanese Barberry (Berberis thunbergii)  (voluntary phase out of 25 cultivars in Connecticut. Lake Forest IL bans Barberry but no other plant, yet it is ubiquitously planted by residents who apparently haven’t received the no-no memo.)

Last, the Illinois Department of Natural Resources and its Illinois Invasive Plant Council have this REALLY LONG list of nasty plant varmints: http://www.invasive.org/species/list.cfm?id=152 which includes Pyrus calleryana but then splits the difference, listing only ‘Bradford’. Is it just ‘Bradford’ that’s the problem or is it all the cultivars (dopey question–definitely all that set seeds). Another ecological restoration “head scratcher” as this Queen Bee sees it.##