One more afternoon in the Florida Keys before I have to return to snowy Chicago…In the meantime I want to tell you about an incredible facility in Marathon called The Turtle Hospital. 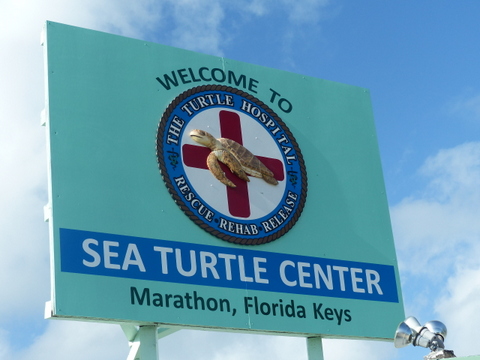 Here’s what I now know. There are seven species of seawater turtles in the world, and while they all inhabit (see map) the world’s oceans, five of them can be found off the coast of Florida. Four species are endangered–meaning they risk extinction from being able to live in the ocean. Only the Loggerhead has enough population to say it’s “threatened” instead of endangered. A fine line.

They range from a foot or so in shell length (the rarest turtle: Kemp’s Ridley) to the Leatherback, which can be 6′ long, weigh 1,500 pounds, dive 1,000 feet down into the cooold ocean, and travel 13,000 miles (one-way) in its migration. If it is sick or injured, the Leatherback is unable to be brought onshore because its soft shell, made only of cartilage, would disintegrate. Below is a photo I took of a Green Turtle, recovering after swallowing a latex glove. Green turtles were once prized (heck, they probably still are) for their meat (ie turtle soup). 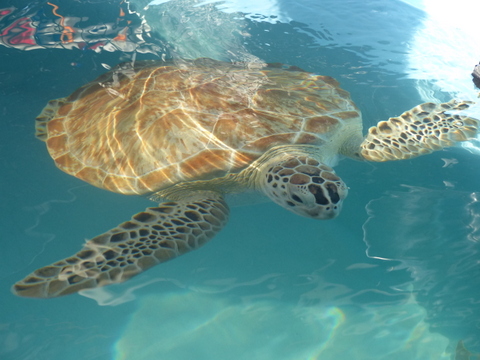 It’s not hard to imagine that turtles are brought weekly to The Turtle Hospital because they have been hit by a boat hull or propeller, or caught in a fishing net. But at The Turtle Hospital, the turtles are often operated on for removing fish hooks (ever see a 6″ fish hook next to an operating table?), swallowing plastic bags, deflated helium balloons, or large “nests” of fishing filament line. And then there’s surgery for removing tumors–fibropapillomas–which are disgusting cauliflower-like growths which are spread by a virus (like herpes). These infectious tumors, benign but terribly debilitating or fatal, are “the only known disease affecting wild animals on a global basis”. Ugh. 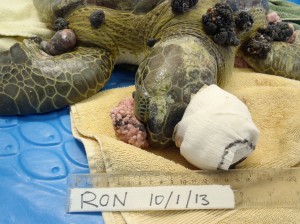 Tumors on a turtle at The Turtle Hospital

So for all us “Snowbirds”, here are some things we can do when visiting coastal waters (including places like Georgia, where 43% of turtle injuries were caused by boats in 2012):

Last, while Florida made a great decision and created a license plate to support this turtle rescue facility and other efforts, this particular hospital was started by a northerner (still going strong) who moved to Florida and used the revenues from his motel to help these injured reptiles. When Hurricane Wilma wiped out the motel in 2005, he converted the whole building to a hospital. People like him deserve our greatest praise.#

← Coral Restorations (And You Thought Restoring Oak Savannas Was Tricky) Spring MUST be near... →
Share this...