The Charles Dawes Mansion: A Landscape Designed by O.C. Simonds for a Vice President and Nobel Peace Prize Recipient

In 1911, Mr. and Mrs. Charles Gates Dawes asked Ossian Cole [O.C.] Simonds to design a landscape for their new home at the corner of Greenwood Street and Sheridan Road in Evanston, Illinois. The couple, along with their twenty year old son, Rufus, moved into the mansion in 1909. 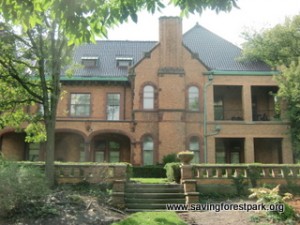 The East Facade of the Dawes Mansion

Mr. Dawes was an important banker, president of the Central Trust Company of Illinois. He also spent time in this nation’s capitol when called by President William McKinley to become Comptroller of the Currency. Dawes did much to reform banking after the devastating Panic of 1893. He ran for Illinois Senator in 1902, but lost. Experts believe that Theodore Roosevelt, who became President following the assassination of President McKinley in 1901, pragmatically sided with Illinois’ “Old Guard” Republicans against “reformers” like Mr. Dawes, who disliked the machine politics of Cook County. 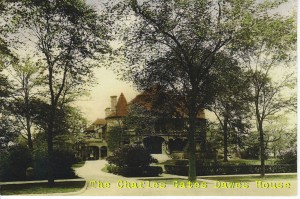 The Dawes’ residence (now the home of the Evanston History Center] sits high on the bluff overlooking Lake Michigan. It was designed in the French chateau style by architect Henry Edwards-Ficken of New York for Northwestern University’s treasurer and business manager, Robert Sheppard. Mr. Sheppard bought this beautifully-sited property in 1882, but the house was built in 1894-96, just after the World’s Columbian Exhibition of 1893. The Sheppards were unable to keep the house after a financial scandal (it appears that he took out a loan for Northwestern University but put only his name on the real documents) whereupon the Dawes’ bought it. Thus, it had little landscape. Mr. and Mrs. Dawes preferred a naturalistic style of design, although they asked for a terrace for entertaining. While the residence’s front door faces south, the east facade faces Sheridan Road and just beyond that, Lake Michigan. The views of the lake are lovely, particularly from the second floor bedrooms.

Simonds’ plan for the landscape created small views through the trees to Lake Michigan and asymmetrical masses of shrubs at the base of the house to reduce its immensity. The plan created an important sense of arrival in the south-facing front yard by planting elms along the front walk. The main perimeter of the two acre property was enclosed with a privet hedge and groves of spruce, ash, elms, sugar maples and evergreens that allowed pedestrians to glimpse the house but which assured the privacy of its occupants.

Simonds added a wild garden with oak, elm and snowberry on the north side, east of the stables. The east slope of the terrace features hawthorn, honeysuckle, barberry, roses, and Japanese lilac, and along the foundation are forsythia, roses and hydrangea. It appears that Simonds was trying to marry French formality and American informality.

Today the landscape has deteriorated but its “bones” are intact. Some years ago, a group of students, led by landscape architect Barbara Geiger, who is also Simonds’ biographer, created a historic survey and restoration plan. We hope that a sponsor (Evanston Garden Club are you reading this?) comes forward to restore this iconic landscape architect’s vision.##

← Ice in March That Little Blue Flower From Siberia. Or Not. →
Share this...