I am not a biologist nor a botanist, merely an interested gardener, but our trip to the Indiana Dunes National Lakeshore did offer a few “head scratchers”. For example, why is it that so often I notice signs like this… 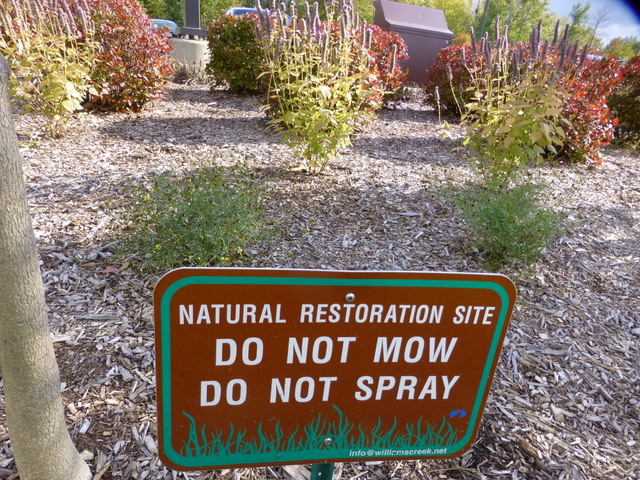 …which are then surrounded by non-native plants (in this case, coreopsis and agastache)? In our town, the “Restoration Area: Do Not Mow” signs posted on the publicly-owned Lake Michigan bluff are apparently markers for inviting rampant noxious weeds to invade the hillside.

I wonder if Henry Chandler Cowles (1869-1939)would laugh and shake his head in bewilderment that so often we still “miss the mark”. Do you know Mr. Cowles, the Chicago botanist who was a pioneer of “ecology” and discovered the phenomenon of “plant succession” in large part from his observations of the Indiana Dunes and its hinterland? It was Cowles, along with Thomas W. Allison (can someone provide biographical information on him to me?) and landscape architect Jens Jensen, who formed the Prairie Club of Chicago in 1908 and began to propose the preservation of the dunes via a “National Park for the Middle West”. That was before the National Park Service itself was established in 1916. The group’s promotional efforts were very successful, but regrettably, World War I intervened as a national priority.

There is a most interesting book, Henry Cowles: Pioneer Ecologist written in 2007 by Victor Cassidy. I learned a lot, particularly since Cassidy incorporated Cowles’ own writing about various local-to-Chicago ecologies. Right now, I am trying to learn about what grows within Lake Michigan’s ravines, which are an ecology which Gerould Wilhelm calls, “unique among the world’s ecologies”.

Speaking of good Chicago ecology books, here are some of the intriguing titles for sale at the Indiana Dunes National Lakeshore:

The Living Great Lakes: Searching for the Heart of the Inland Seas, by Jerry Dennis

Roadside Geology of Indiana, by Mark Camp and Graham Richardson

The Nature Conservancy’s Guide to the Indiana Preserves

Birds of the Indiana Dunes, by Kenneth Brock

A 1,000 Mile Walk on the Beach: One Woman’s Trek of the Perimeter of Lake Michigan, by Loreen Niewenhuis (I heard her lecture on her trek: very very interesting!)

Thanks to all these authors, beginning with Professor Henry Cowles, for writing down all this wonderful research for us. An amazing commitment of time and energy!##

← The Indiana Dunes National Seashore: Homes and Homesteads Woe the Ornamental Pear Tree: Invasive, But Does It Make the "Invasive List"? →
Share this...