If you’ve ever shopped at Chalet Nursery in Wilmette, or watched Channel 7 TV in the morning, or listened to Mike Nowak’s Garden Show (lamentedly it is no more), or well, just been around the plant world, you have seen the ever-enthusiastic Jennifer “Who Knows More Than God About Plants” Brennan.

Jennifer’s energy and exuberance knows no bounds. The woman doesn’t ever snooze. In addition to all else, she is now serving as the central region director of the Perennial Plant Association (PPA), which is the group which designates the “perennial plant of the year” for retailers to type. In 2014 it was Panicum virgatum ‘Northwind” which was grown from wild-collected seed from South Elgin, Illinois. This blue-green, erect grass was found by Chicago’s “very own” Roy Diblik, co-owner of Northwind Perennial Farm in Springfield, Wisconsin and author of The Know Maintenance Perennial Garden.

The PPA also holds seriously great conferences, most often attended by pro’s but they are nice people so anyone can go. So great that I’m still laughing about one that I attended in 1998 where a very famous landscape architect–old as the hills!–tried to kiss me out behind the hydrangeas. When I got back on the bus, I told my friend Pam about the incident. She laughed so hard, then said, “Ha! I was 1996!”

But I digress. Jennifer has organized a conference which every one of you MUST attend if you like perennials. And who doesn’t? Plus you get to go to The Morton Arboretum, which it’s time for you to revisit. It’s fantastic! Here’s the announcement of this wonderful conference. You will learn so much! 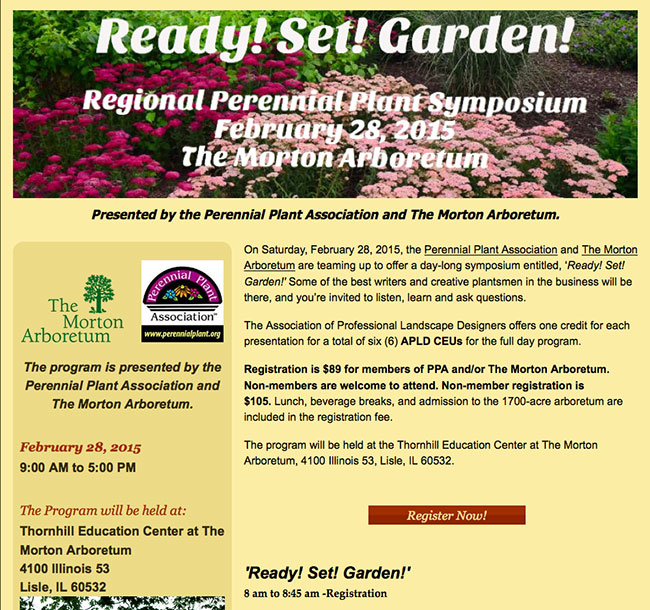