During Monday’s blizzard (!), I glanced outside and a flash of orange caught my eye. There were two Robins, poor dears, hunkered down in the Honeylocust tree closest to the bird feeders. This reminded me of the day, several years ago, when I looked out at the Christmas-green-filled containers on our front terrace where dozens (and I do mean, dozens) of Robins were feasting on the shrivelled Winterberry [Ilex verticillata] berries. The next day, we had a terrible terrible cold snap with snow. I called my husband’s aged uncle–a retired surgeon but also an amazing birder who in his lifetime saw every specie of North American bird but two–and asked him what he thought might have happened to all those Robins as a result of the sudden cold. Pity me for asking such a question of a surgeon with no “bedside manner”. With no hesitation, he said, “They probably all died”. Body blow.

But I digress. Journey North is a really interesting website which has an app allowing us to record our first sightings of Robins, Butterflies, Hummingbirds, Frogs, Earthworms and many other creatures. Check it out. Love the maps!# 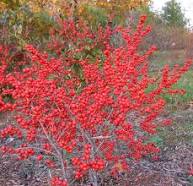