It All Adds Up…or…Plants of the World, Unite!

I think one of the best things about life on earth is the NY Times. I’ve been reading it daily–and fairly closely–every day since I was a teenager.

There is so much information in every issue that it can make my brains hurt. And since there is not enough room in my cranium (please no remarks) to store all this written material, I am compelled to share the paper’s good and fascinating information with…you. From time to time, that is. I won’t pester you with doomsday too often, promise.

Here’s some recent good stuff that relates to gardening, which relates to conservation, and animals, and minerals and health and capitalism and government and, well, to my life. And to your’s.

For example, an example of animal conservation. You will recall, no doubt, that our 19th and early 20th century cowboy ancestors thought the Prairie Chicken so delicious that they shot dead one million birds from the tallgrass prairies that lined the Gulf of Mexico in Louisiana and Texas. They probably killed ’em all in just one day. Or maybe two. Anyway, it’s 2015 and now a TOTAL (!) of 104 birds struggle to survive at the Attwater Prairie Chicken National Wildlife Refuge in Eagle Lake Texas. Despite the best efforts of the US Fish & Wildlife Service, the chicks that they had carefully and fairly recently hatched were dying.

Why? Because, the NYTimes tell us, an invasive species–red fire ants–“were decimating the insect population of the prairie. While adults eat plants and insects, the chicks dine primarily on insects, [so] the chicks were starving to death”. The good news is that “exterminating the fire ants and adding more plants that attract insects in the refuge has helped.” Last year, 60% of the chicks survived. Sadly, though, “a storm dumped more than 10 inches of rain on the refuge and the new chicks drowned or died of exposure”. Can you spell, “climate change”?

Next, the NYTimes leads us to the war between organic companies and the Monsanto regarding GMO labeling on the food we eat. The Federal government requires any product labeled “organic” to be free of ingredients produced from GMO seeds. On the flip side of that coin, Monsanto hires many professors to testify against the labeling horror in states that might want to follow the Federal  effort with their own labeling legislation. [Since consumers now doubt the profe$$or$, Monsanto’s advertising is soon going to feature more believable “mommy farmers”, but I digress.] But since the “organic movement” doesn’t feed the world or make billions in profits, the Agriculture Department in 2014 “approved GMO soybeans and cottonseed designed by Monsanto and treated with Dow-produced herbicide”.

Let’s keep going here. While the Feds or states don’t make most food companies disclose what’s actually in our food, the Federal government will now allow companies to say “made without ractopamine”, a chemical given pigs and chickens and some beef so that the animals can gain muscle weight while using fewer calories. Did you ever know about this practice before today? (I didn’t.) You want to know just how bad this stuff is? The Chinese won’t let us bring pigs or chickens into China because they don’t trust it. The Chinese! Now that explains why the big boys, like Tyson, are all of a sudden eager to have the Feds create a “made without ractopamine” label…they want to sell their animals to China (and to the EU and Russia and all the others that ban ractopamine.) So it was really not the organic crowd that got this label labelled…it was the mega-ag fellas.

Stay with me here. Can any of my readers imagine CROPS (ie plants) that don’t die after being (accidentally) sprayed by RoundUp? Well, okay, it’s old news that we eat soybeans and corn which are genetically engineered to withstand RoundUp. The new news is that the Ag Dept has approved corn and soybeans that can withstand spraying with 2-4 D. 2-4 D? OMG, do you remember Agent Orange?! Here’s the grim facts and “government speak” of this craziness:

“The Agriculture Department, in its environmental analysis, predicted that approval of the crops would lead to a 200 percent to 600 percent increase in the use of 2,4-D nationally by 2020. But it said analysis of the effects of that increased use was the responsibility of the E.P.A. The Agriculture Department said ITS [emphasis mine] approval depended mainly on whether the crops would harm other plants.”

Now, just in case you worry about human trafficking or slavery or child soldiers, as the State Department does, the NYTimes tells us there is a 356-page disclosure rule via Dodd-Frank that requires our companies to disclose “conflict minerals” in their products (like frozen shrimp from Thailand sold by Costco or tin that gives Party City’s balloons their sheen).

So, here’s an idea. If we can require such an onerous disclosure rule that probably has little real impact on slavery (compared with, say, paying decent wages), can’t we know that the food we eat was made with seeds resistant to the chemicals that kill the insects that kill the Prairie Chickens or the milkweed that feeds Monarch butterflies or the herbicide that killed people that lived or soldiered in Vietnam? Just sayin’.

Gardening these days requires a lot of thought.##

PS Here’s some good news: McDonalds, which uses 2 billion eggs annually, wants to let their hens be cage-free. This will take ten years to accomplish, but hey. Free the hens! Free the hens! 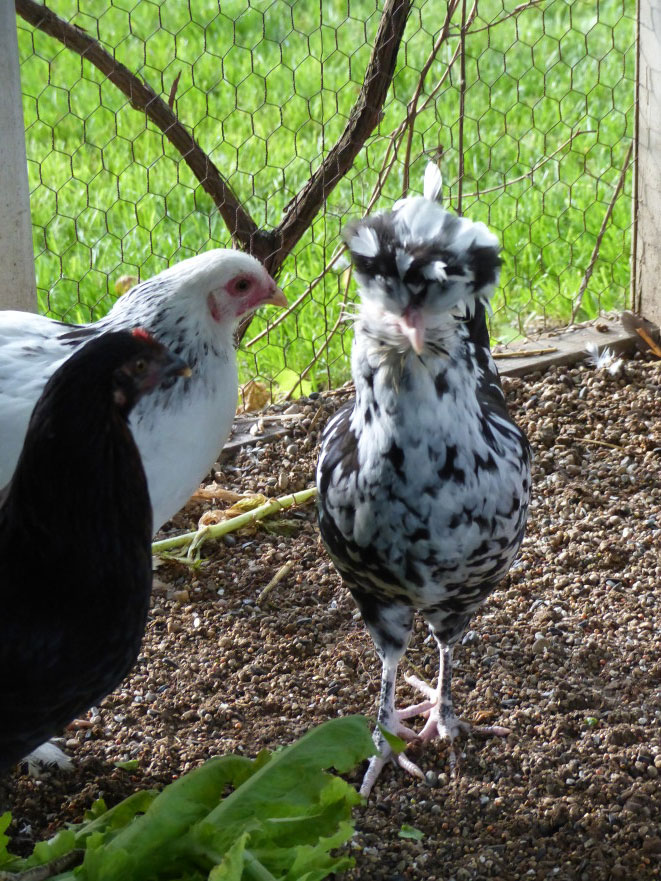 ← Perfection! So Beautiful, So Scary, It's the Future →
Share this...