Fave-rave spring plant, but what is it exactly? 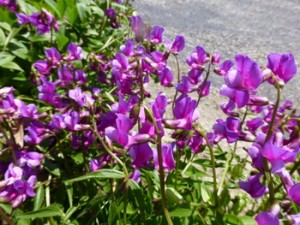 Listen up, people! Queen Bee orders you to purchase this plant: Lathyrus. But even the Queen, in all her excellence, does not know exactly which Everlasting Pea she is recommending. It is not a fragrant Sweet Pea [Lathyrus odoratus], as alas, this flower has no fragrance. It is not Lathyrus latifolius, which has no fragrance but is a vine. It could be Lathyrus vernus, aka Spring Vetchling, but the garden center catalog I’m consulting says that Spring Vetchling blooms in June-July, and my Lathyrus definitely blooms in April-May. And it blooms its little head off for weeks. Which is why it’s a favorite plant and you MUST HAVE IT.

[This is where garden centers are supposed to comment that they not only know it but they stock it.]

So…a little botanical background. This plant is cool because it is a Lathyrus. Which means it is a Pea, which means it is a Legume, which means it fixes nitrogen in the soil which everyone knows is important but no one knows why. Lathyrus is in the Fabaceae family of plants, putting it with cousins like chick peas and soybeans and clover and redbud trees and wisteria. Which makes it WAY BETTER company than my cousins, except for the evil Crown Vetch which has the same disqualifiers as my cousin Peter who is a real overreaching hanger-onner too. But I digress. If you consult a botanical tome, you will find out something wonderfully arcane but useful on the garden tour: the leaflets of legumes open in the day and close at night, but this sleepytime movement is actually a circadian phenomenon not dependent on light or dark. OOOH, that’s cool, man, what’s it smokin’?!

To continue, this is one great plant. It is one of the first to bloom in my garden. It throws off seed out of its green, then brown, seed pods and little babies are born and they transplant really easy and then you have my really really favorite thing: a FREE PLANT! What is not to like here, folks? And did I mention the pollination aspects? Oh, well I don’t know what those are because it’s too early for butterflies but possibly bumblebees are gulping its nectar. [Readers, inform me!]

PS What is not to like? Well, I’ll name one thing…if you follow Internet links far enough you may, as I did, come across the caution, “The seeds…if eaten in large quantity, can cause lathyrism.” Oh, really? What the heck is lathyrism and do I have it? Search some more, and Queen Bee will find out that apparently she has been ingesting a few too many Lathyrus peas. Uh-huh, uh-huh, we know this because lathyrism is the “inability to move the lower limbs and the atrophy of the gluteal muscles”. OMG: that’s why Queen Bee wants to lie on a couch and she got a saggin’ ass! But isn’t it nice to know that it’s the plant’s fault?!## 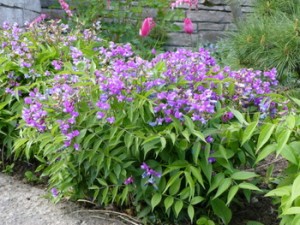 ← Get Thee to the Dane County (that's Madison, WI) Farmers Market! Redbud Trees: Try All the Flavors →
Share this...