Whoa…just how would we protect the habitat of a butterfly?

This situation with Monarch butterflies is serious and getting serious-er. And just imagine if our Presidential candidates have to express their views on it? The Donald might propose building a wall, but it would be a beautiful wall…maybe orange and black stripes?

← Second Snow How Far From a River Do I Want to Build? Ask Some Regular Americans →

How can you not like snow when it blankets the trees in white? So beautiful…so quiet…there’s peace. On earth.

← Brussels Sprouted...into a topiary! Whoa...just how would we protect the habitat of a butterfly? →

“We Say What You Think”

Having recently spent a month bouncing around the Lower Keys (we rented a place via VRBO. Don’t get me started on horrible landlords; then again, the sunset from the porch was awesome), I was intrigued to read this essay about Naples, Everglades, sugar plantations, and the Keys. Lucia does “say what I think” (her motto). In fact, she does a better job thinking through what I think than I think I could ever think. Read Lucia’s Symposium #31: Old Florida and The Everglades. Someday somewhere I hope I find a spot than doesn’t want (and doesn’t even take time to think about) to take paradise and put up a parking lot…##

Weedpatch Subscribers: I hope we have 100% participation in this lovely offer from Kay MacNeil to receive Milkweed seeds. Just send her $2 and a SASE. (I just did. And I will find a great spot along a roadway or park to toss the seed. This is my ‘suburban guerrilla’ planting for pollinators campaign.) But I digress. Here’ s Kay’s offer:

“Hi, Rommy. I am the chairman of the Garden Clubs of Illinois President’s Project, Milkweed For Monarchs.  This is an effort to educate gardeners and others to spread more Milkweed around their yards and community. The idea is that next fall we will harvest and clean milkweed seed  and give it to IDOT and hopefully also the Tollroad.  I also send 3 kinds of milkweed seed to anyone who can’t find another source if they send me a stamped self addressed business envelope with $2. If you go to Milkweed for Monarchs for information, you will also find my new  How To Become A Caterpillar Mother” information”.

Thanks for helping the Monarch Butterflies! And don’t forget to plant dill or fennel or parsley for the Swallowtails.#

Benjamin Vogt, a Nebraska landscape designer, has a blog that I recently added to Favorite Places: The Deep Middle. His post on March 17 was a Resource Guide to information about pollinators and native plants.

The Ultimate Pollinator & Native Plant Gardening Guide
I’m [Benjamin Vogt] celebrating 2 years of Milk the Weed with the nerdiest, awesome-ist list of links on butterfly and pollinator gardening I can come up with. It’s certainly not a complete list, but I hope it’s helpful to you as both a practical and philosophical guide. Prairie up! 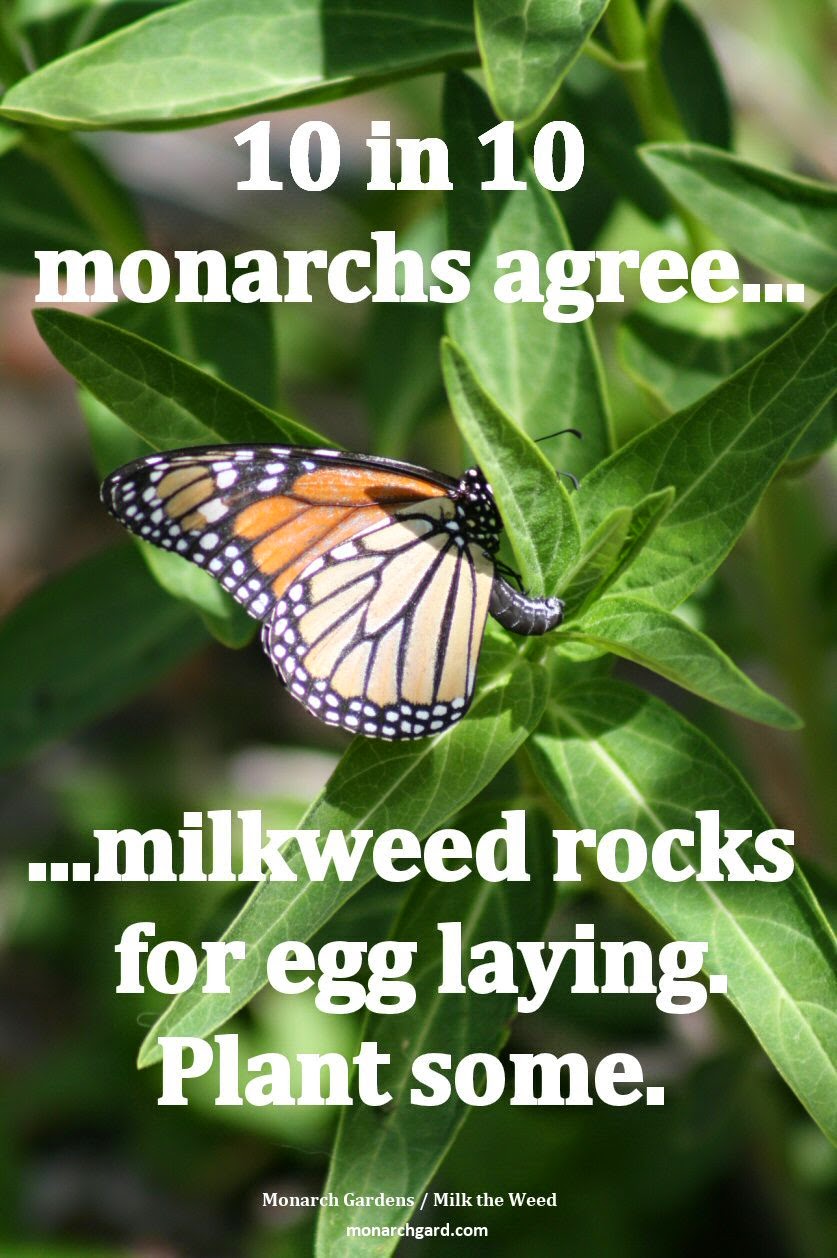 (from The Deep Middle, B. Vogt)

Here are a few links from the article to get you started:

How Monarchs Use Milkweed

Create a Habitat for Monarchs

Benjamin’s article contains a wealth (pages!) of resource links.  Visit his site to see them all. Note that his statement sentences do not look like links, but if you hover over the text, it will highlight to show the link. I have also posted a link to his article on the “Cool Links” page, so you can have that resource at your fingertips. Prairie Up!#

Pat Hill posted this article recently on her terrific blog, Pat Hill’s Natural Midwest Garden. She and I seemed to be thinking similar thoughts about spring that day… Enjoy! rl

I wonder if the sap is stirring yet,

If wintry birds are dreaming of a mate,

If frozen snowdrops feel as yet the sun

And crocus fires are kindling one by one:

I am sore in doubt concerning Spring.

March is the drabbest month of the year in the Midwest.  The snow has melted revealing vast expanses of brown grass and a winter’s accumulation of trash that’s been hidden beneath its white blanket.  March is completely unpredictable—warm and sunny in the 50’s or even 70’s one day, cold and raw the next.  Rain, wind, snow, and sometimes ice storms are part of the March package.  Some years Spring starts in March; other years, she stubbornly waits until mid-April.

But spring is in the air, literally.  On warm evenings one can smell spring, bringing back memories of every spring one has ever lived.  Green tips of plants poke through the wet soil; the male cardinal (which has been here all winter) has started his cheery whistle—his courtship song—once again.  The robins have begun to arrive; the snowbirds will leave by mid-April.  The cacophony of great flocks of ducks, geese, and sandhill cranes flying north to Minnesota, Wisconsin, and Canada brings us to the window to marvel at whatever primal instinct causes them to do this every March, flying high in their perfect V-formation.

Pussy Willow (Salix discolor), every child’s favorite symbol of Spring, opens its furry gray catkins at the beginning of March or some years as early as February.  Easily found on spring walks, it grows in shrubby marshes and wetlands throughout the Midwest, frequently in the company of other willows and Red-osier Dogwood.  With permission, we cut armfuls of branches to bring Spring indoors.  (The Pussy Willow sold in flower shops is usually Salix caprea, a European import.)  Salix discolor grows into an attractive, multi-stem shrub, 10-15’ tall, that is suitable to grow on home grounds in moist to wet areas.  It doesn’t appear to be available at nurseries, but stems root quickly in water.

A source of ornament, sentiment, shade, and aspirin, the willows are a rich part of our history and landscape.

The round, furry gray catkins of Quaking Aspen (Populus tremuloides) are the first to appear in spring, sometimes as early as February, even before those of Pussy Willow.  The catkins soon turn into delightful, fuzzy, maroon and gray dangling caterpillars.

Quaking Aspen is found in every county in the Chicago area, mostly in low ground, but conversely in sandy areas, as well.   This colony I have photographed is next to a railroad track, in the town where I live.  (These and several Bur Oak trees were cut down a few weeks ago–it seems they interfered with truck traffic.)

Its tall, straight trunk, covered with a whitish bark, marked by black horizontal scars and prominent black warty patches, is topped by an upright oval crown.  The round, glossy green leaves, dull beneath, become a striking golden-yellow in autumn.  Its flattened petioles allow the leaves to flutter and rustle in the slightest breeze.  It colonizes through its root system cloning itself into large groves.

Every summer, when I was a child, we went to my grandpa’s cottage on Popple Lake,  near Chippewa Falls in Wisconsin for our summer vacation.  Popple is a local term in the Upper Midwest for Quaking or Trembling Aspen .

“One cloudy April day, when threatening rain caused  the west to be in a dramatic  mood, we were scurrying along to reach some shelter before the worst might happen.  A lone hazel bush, perhaps the last of a great colony, made us pause on our way.  Why it had been spared I do not know, but there it was in a festive spring outfit.  We were astounded by the attraction this simple  plant possessed.  The secret of it all was its yellow catkins against the threatening purple clouds in the west, bringing out their exquisite beauty…I had known the hazel since boyhood days, but I had lived almost an average lifetime before I saw its real significance and its charm.  From that time on, a hazel bush, backed by the purple branches of our native plum, has graced a corner of my garden, and every spring I wait for the spring song of its catkins.”

From early-to-mid-March to mid-April. golden pollen spills from the pendulous male catkins, lighting up savannas, woodlands, and fencerows.  Growing 8-10’ tall, American Hazelnut forms colonies by means of root sprouts.  It makes a splendid hedge, or combine it with American Plum (Prunus  americana )    as  Jens Jensen suggests.   I’ve searched in vain in the  Forest Preserves of northern Kane County where I live to see it in its native habitat. (I once found a Hazelnut growing in the midst of a tangle of Buckthorn in the backyard of a client, much to my delight.)

The very first herbaceous plant to bloom is the Skunk Cabbage (Symplocarpus foetidus).  It creates its own heat, melting the snow that covers it—its unusual flowers may emerge as early as February.  The yellow-green flowers, arranged in a knoblike spadix inside a green and purple-brown mottled, hood-like spathe, are attractive to early pollinating insects and to those of us who are eager for the earliest signs of spring.  Skunk Cabbage grows in colonies in fens and springy places.

With our suddenly warm weather that started last Tuesday, Winter Aconite (Eranthus hymelis) has emerged from the cold earth, and is already in full bloom.   Winter Aconite is native to Europe, but it came along to this garden via some trillium I transplanted from my old garden.  A member of the Buttercup family, its golden cups are the earliest perennial to bloom in our area, sometimes as early as late February.  Plant it under deciduous trees–a spring ephemeral, it blooms in full sun in spring and then its flowers and leaves disappear until next spring.  The tubers increase making an ever enlarging circle.  Easy to transplant, they can be moved to other locations after bloom or given away to friends.

I have only a tiny patch of Snowdrops (Galanthus nivalis) next to my back door, but they are always welcome in earliest spring.  Another early bloomer native to Europe, it, too, is an ephemeral that should be planted in sweeping drifts under deciduous trees.  It can be situated within a matrix of sedges.  It does increase, but is not considered invasive.

The temperature was In the 60’s this past week and 70’s is predicted for this afternoon–hooray! I heard the Cardinal’s whistle a few days ago.  I also saw a pair of robins on Friday hopping along in my grassy parkway.  What do robins find to eat this early?  No insects or worms yet.  The only thing for them to eat, as far as i know, are persistent berries which still cling to shrubs and trees.  I have a few rose hips on my Illinois Rose (Rosa setigera) and my Early Rose (Rosa blanda), but, alas, the robins didn’t find them.  Does anyone else have information on how robins survive March when they arrive here?  Please share with us.

March doesn’t zap us with spring, as do April and May.  We have to look for it, but it is there as Nature starts her inexorable cycle once more.  Stay tuned.