Thanks to Chicago Botanic Garden veggie garden manager Lisa Hilgenberg for sending us a photo of her Brussels Sprouts topiary, which she says was inspired by chefs at The White House. (Recently Lisa was a special guest for a tour of the First Lady’s organic garden and the White House kitchen(s)(s)(s). How cool is that?)… 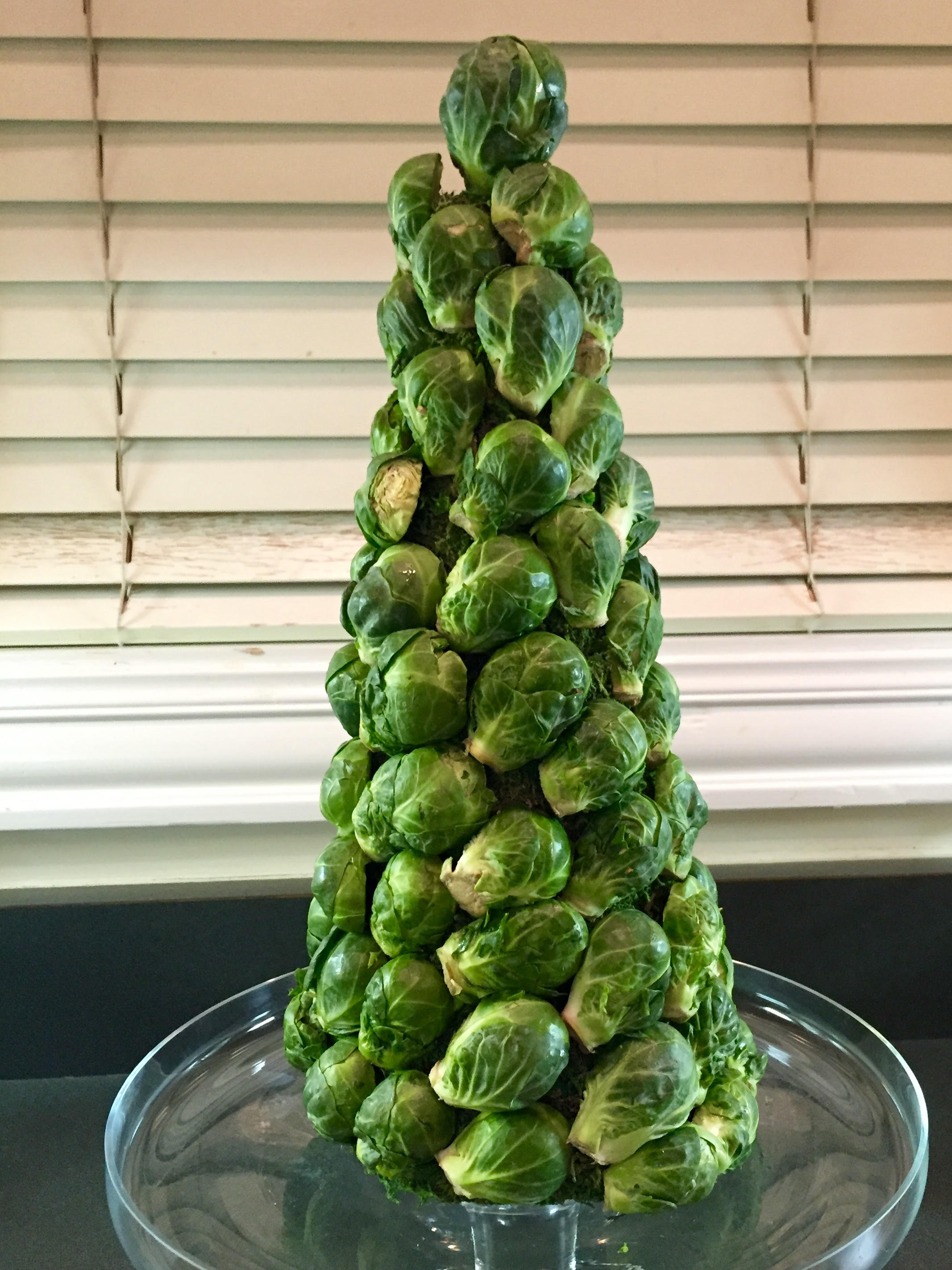 It’s a lovely thing, this topiary, and it makes me happy to look at a thing of beauty because I was just watching TV news. Another gun massacre. Which means another call to Mark Kirk, who I called this morning to say that Mitch McConnell cancelling health money for the 9/11 first responders is shameful. And I spent all day finding new health insurance (which I didn’t finish yet because I can’t figure it out) because my $900/month Gold Blue Cross policy is now useless at all Northwestern hospitals and “out of network” at Rush (check your policy if you go to Rush). Grumpy? YES, I AM, aren’t you? Makes me want to throw a Brussels Sprout at a Republican.##

“We Say What You Think”

Having recently spent a month bouncing around the Lower Keys (we rented a place via VRBO. Don’t get me started on horrible landlords; then again, the sunset from the porch was awesome), I was intrigued to read this essay about Naples, Everglades, sugar plantations, and the Keys. Lucia does “say what I think” (her motto). In fact, she does a better job thinking through what I think than I think I could ever think. Read Lucia’s Symposium #31: Old Florida and The Everglades. Someday somewhere I hope I find a spot than doesn’t want (and doesn’t even take time to think about) to take paradise and put up a parking lot…## 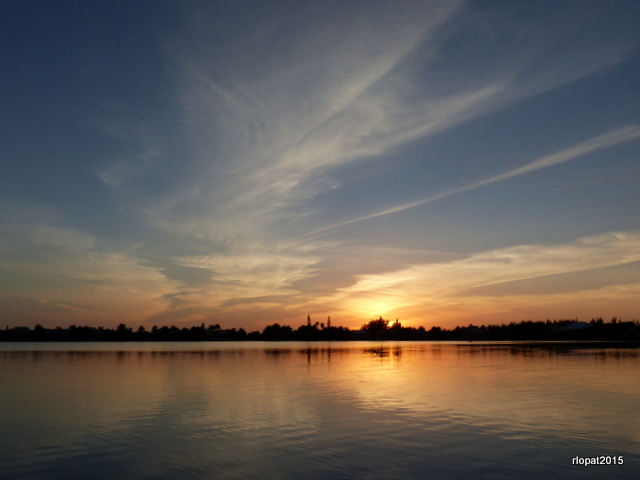 I have a friend named Mike Nowak, a fellow hale & hearty Pole and (hail and hardy) garden writer (although Mike is way way way more prodigious than I). He just sent me his new book, in which he wrote the following inscription (which I suspect he writes in every book he autographs, even when the book was not written by him): “To _____: who is almost as funny as I am”. This made me laugh. A rare thing, these days, what with beheadings, floods, social injustice, and difficulty finding the Alpo dog food my dogs prefer.

Um, back to Mike’s book. One thing I realized about myself after I read most of his essays is that I mostly read backwards. That is, I don’t start at the beginning and go forward. Instead, I randomly thumb through a book, breaking the spine at not-the-middle, let my eye alight on a line of text, and then I read from that point forward. If I like it (which in this case I did, a lot), I will page back to the first paragraph of the essay and then read all the way through. This bad habit probably started in college when I learned to read only the first chapter, last chapter, and last paragraph of every chapter in a book. This trick sped up the Russian Revolution considerably….

Mike also helped me discover another bad habit: I am a page corner “folder-over”. (Hmm, maybe it’s “fold-over-er”?) That’s how, like a dog, I mark territory I like. And I folded over an awful lot of pages in this book. Not because I was learning anything about gardening (no one, not even Mike Nowak, actually KNOWS anything about gardening), but because so many pages are very funny. Out loud funny. Being Polish, of course, I especially enjoyed his description of his long-departed relative, Telewizja Kablowa “Cable TV” Nowakowa, who, operating out of a small village near Krakow, is said to have created cooking recipes for over 12,000 insect species…” This made me guffaw, which in Polish, is spelled, guffav. Or guffow. Never mind.

Last, I found out that Mike and I have distinctly different views of only one thing: the color pink in the garden. Oddly, I spent yesterday taking photos of pink flowers to show you in their dazzling array. Then I opened Mike’s book and read that pink is “ubiquitous, relentless, abhorrent, insidious, formidable, unyielding, despotic, and pitiless.” Tell us what you really think, eh, Mike? Mike blames his horror of pink flowers on early color TV sets, but I? I LOVE pink. PINK, PINK, PINK. PINKETY PINK PINK, can’t have enough. It’s a word that’s fun to say! It’s fun to wear (ok, not if you are manly Mike Nowak.) Or maybe I came to love pink flowers because “I Love Lucy’s” hair was so extraordinarily PINK and GREEN on our tv… Nonetheless, I present PINK IN THE GARDEN: 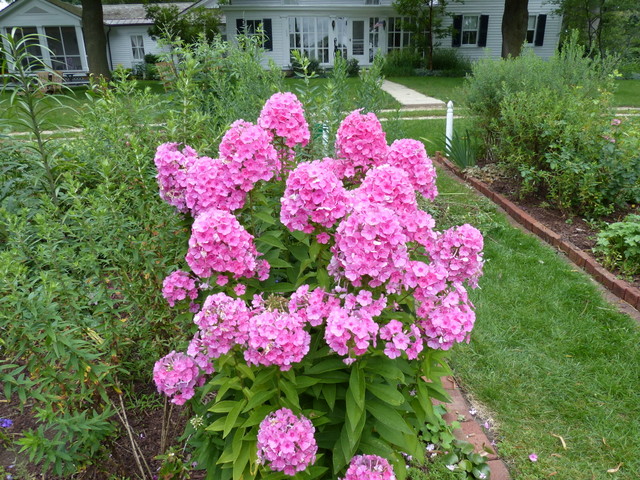 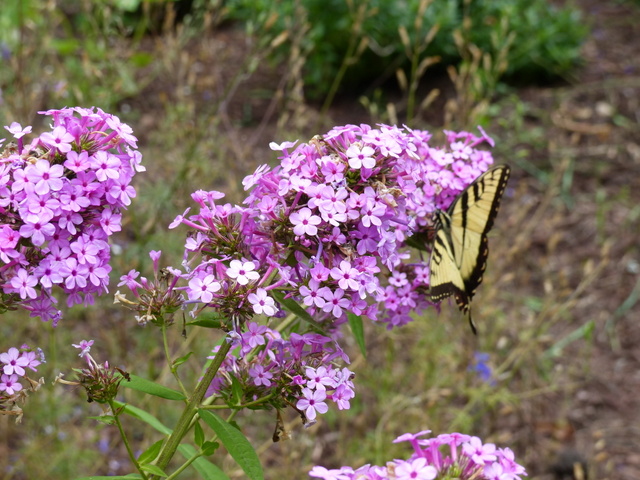 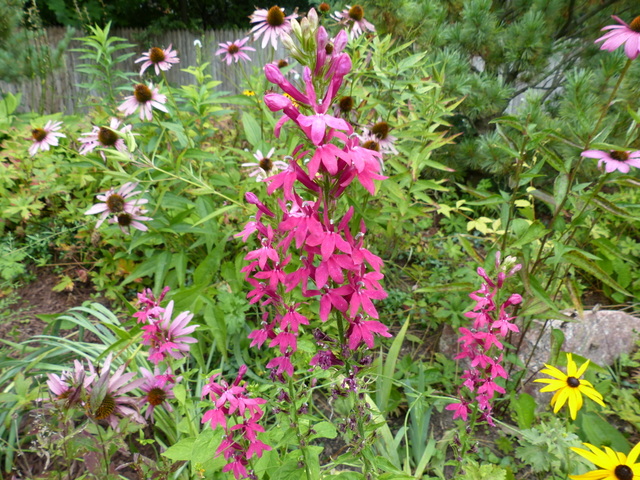 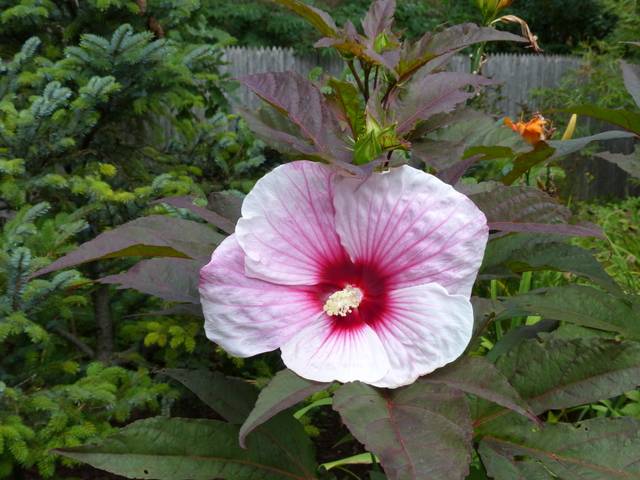 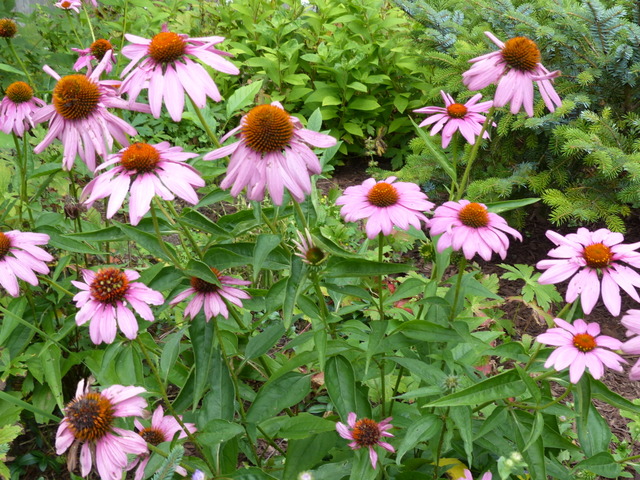 What more can I say about Mike’s book, Attack of the Killer Asparagus and Other Lessons Not Learned in the Garden? I can say that if I was inclined to spend a lot of time in a bathroom, this would be the book I would want to read there. (Way way better than Reader’s Digest.) Instead, I think I’ll take it to bed with me and let my husband try to figure out why I’m laughing. Out loud. This time.#

Hi, Weedpatch fans. So sorry I’ve been SO SO out of touch: I am devoting a lot (!) of time to trying to save 400 mature and reproducing oak and hickory trees on an 8 acre site in Lake Forest. A shopping center developer, Bill Shiner, has arrived in town and wants us to waive or s-t-r-e-t-c-h every ordinance to accomodate four outbuildings (maybe Chase Bank, Starbucks, ChickFilA, don’t know he’s not sayin’) plus Whole Foods (maybe). The lure of tax $$ is great, but to me the lure of saving trees and protecting our laws should be greater. Anyway, it’s taking a lot of time. Please help out by making comments on Whole Foods’ website: how come the company says it’s “sustainable” if it wants to take paradise (did I mention demolishing a landmarked mansion?) and put up a parking lot?

Of course, if you are a responsible gardener in the Chicago region, you must know the name, Jens Jensen. Last night I saw on WTTW a preview of what looks to be a wonderful documentary on the contributions of Jens Jensen (1860-1951) to parks and landscape in the Chicago region. The documentary airs tonight, both on TV and at Millenium Park. Here’s the link: http://chicagotonight.wttw.com/2014/06/18/film-documents-life-and-work-jens-jensen

Please watch and share what you learned. Thanks for hanging in there with me while I lash myself to yet another 200 year old oak tree. Could this really be happening–in Lake Forest? Don’t they call it “slash and burn” or “deforestation” in other countries? Sigh. Pretty depressing. 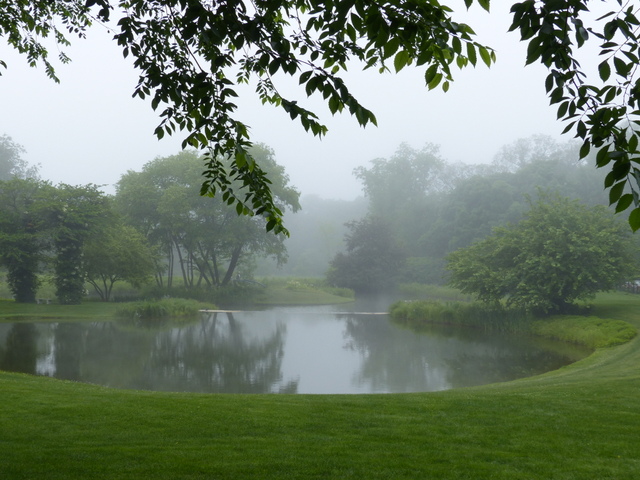 And Now for my Substitute Guest Editor or…

A View from A Broad!

I have always been a HUGE fan of the Divine Miss M’s and, obviously having too much time on my hands today, I landed on Bette Midler’s website. Actually, I was looking for tickets to the Carole King show in NYC, but that’s another story.

Anyway, Queen Bee burst a gut reading Miss Manifesto’s bloviating blog: she thinks like I do. (And you do.) So here it is for you: http://bettemidler.com/.

Oh, what I wouldn’t do to share a laugh and a Cosmo with her. Enjoy! #

And another thing: Here’s an example of how goofy the world is. For thousands of years, maybe eons, Canada geese have been migrating from Canada to Florida, from Florida to Canada, back and forth, forth and back. All that time, they’ve had all their favorite watering holes along the way, each goose parent teaching their goslings where to stop, especially when they are old enough to lay eggs and want a nice lakeside location to nest by. But then along come humans, and decide to fill in the lake and build a nice big Costco instead. But that goose just doesn’t stop wanting the old scenic location…God bless her. 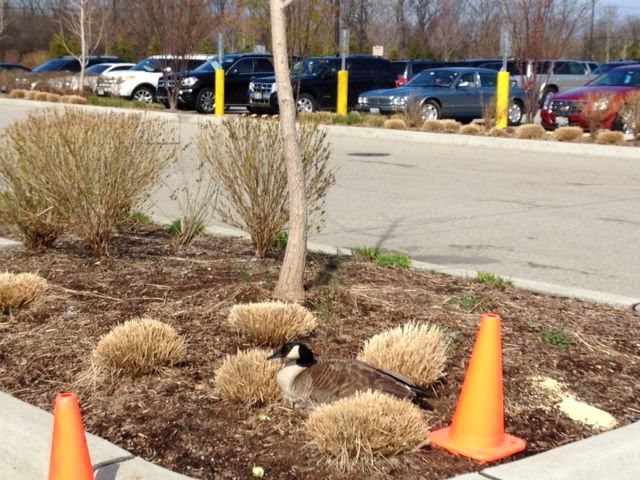 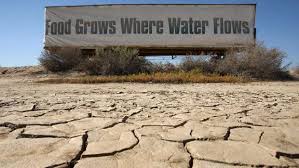 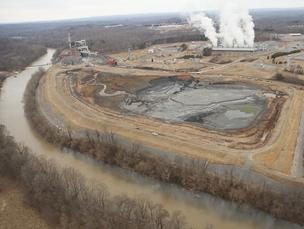 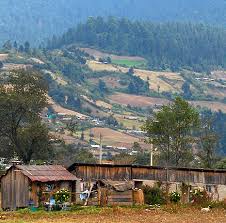 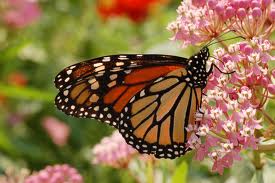 ← Spring MUST be near... Start to a Cheerful Tuesday →
« Older Entries